By Brian Spector, Chief Product and Technology Officer at Qredo

NOTE: Qredo has made some important changes to its tokenomics model since this post was published in June, 2021. Read about them here.

Qredo now embarks on the next stage of its journey to decentralization by launching the QRDO token.

Unlike Layer 1 token models that only reward validators for securing the network, QRDO is tailor-made for a Layer 2 solution and designed to reward all network participants.

QRDO achieves this by fusing the features of “utility tokens" and “governance tokens" to create a user-centric tokenomics model that rewards network activity through multiple innovative incentive structures.

"We have built a uniquely user-centric model which incentivizes all network participants as opposed to just network validators. Layer 2 solutions must incentivize usage and reward liquidity. With QRDO, all of our users will share compensation based on their activity."

There are six types of user on Qredo Network:

Qredo uses a unique combination of fee-based and inflation-based compensation to drive aggressive rewards for all stakeholders and fuel an engine of rapid adoption and growth.

Traders and (custody users) of the Qredo Network pay fees, which are calculated as a small percentage of the Layer 1 assets being transferred, traded or stored. These fees are rebated up to 99% in QRDO tokens (which must be staked with validators for a minimum period of time).

The exact split of block rewards between these four streams can be adjusted based on the network needs and DAO preferences.

There is a hard cap of 2 billion on the total supply of QRDO tokens, which will be introduced into circulation via two methods: a vesting schedule and inflationary emissions.

Qredo owes much of its success to the community that has joined its journey over the past two years. As such, one billion tokens (50%) will be allocated to early stakeholders, including the Qredo core team, shareholders, contributors, along with funds for treasury management, a fund to help bootstrap initial Validators, and a fund to bootstrap the ecosystem. Also included in this billion is a portion (10%) that will be sold between a mix of private investors and the general public. 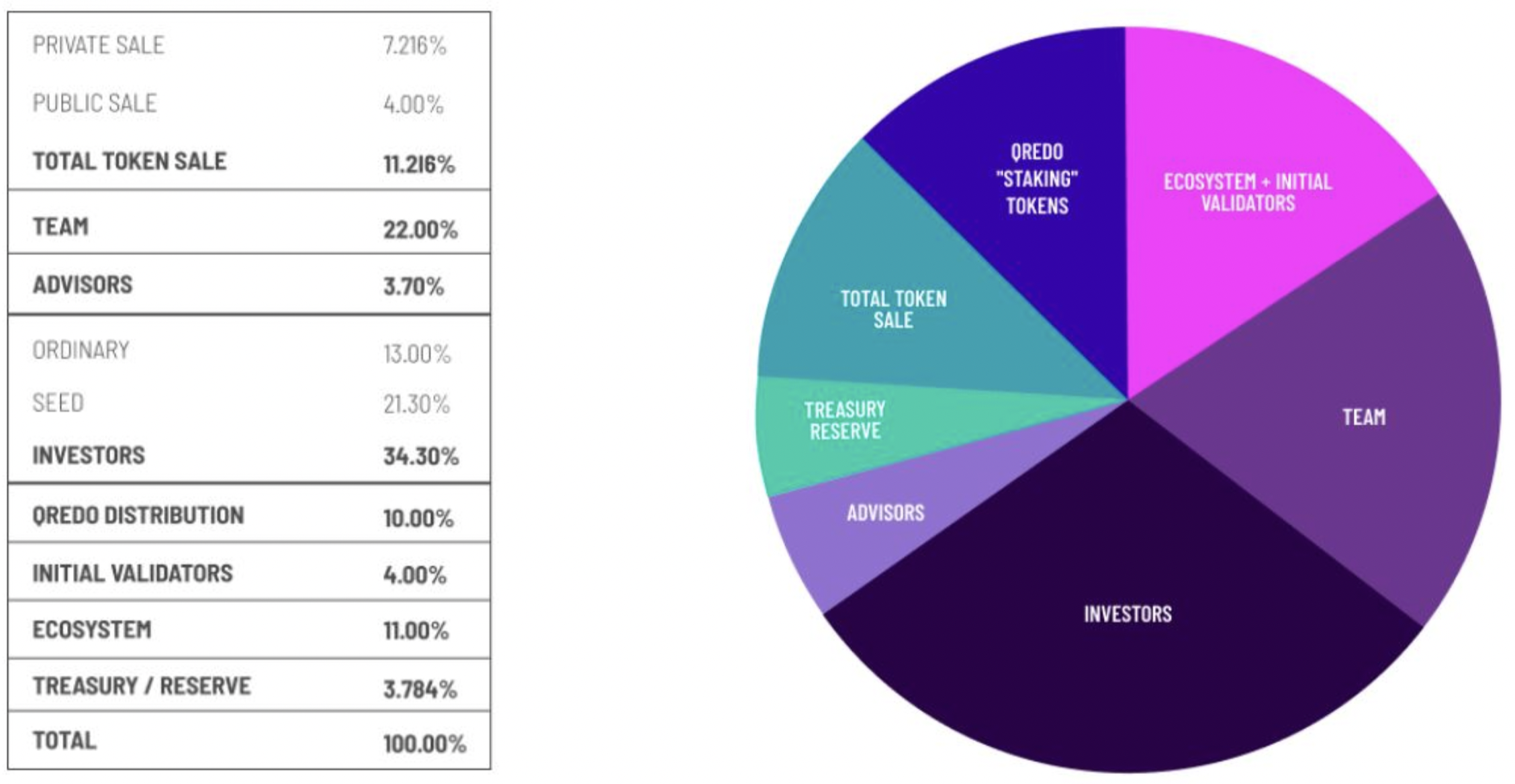 To ensure sustainable network growth, there will be an initial lockup period in which early investors have the ability to stake tokens within the platform to earn rewards, but withdrawal of QRDO from the network will be limited.

Once the lockup period is over, full flexibility will be restored and QRDO can be used within the Qredo network to earn yield, or withdrawn from the network and traded elsewhere within the Ethereum ecosystem. The vesting is scheduled over various timelines: The second billion tokens are set aside for when Version 2 of the protocol goes live, and will be distributed to network users as a combination of rebates on fees and inflationary rewards, as detailed above. This emissions schedule will slowly decrease until it runs out with an expected lifespan of 50 years.

To get all the details on token emission schedules, governance and economic incentives, download the Qredo token paper.